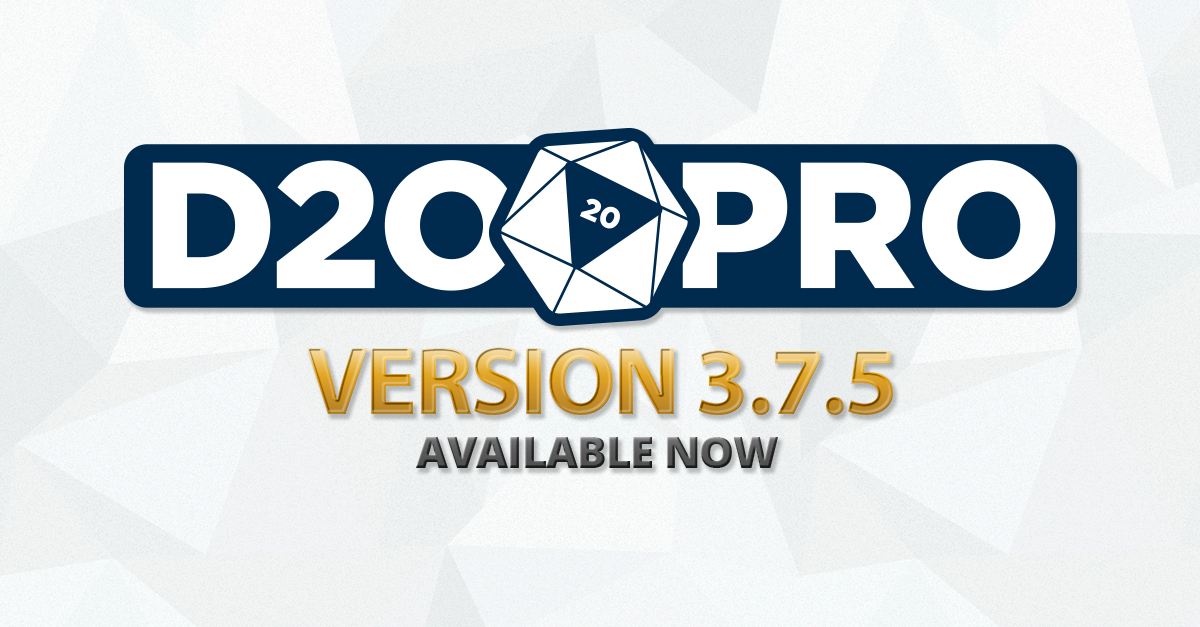 If you were following our beta track, you will likely have picked up a few incomplete class definitions in your Rules Library->Class Library. You’ll want to purge these and do a manual import of the classes.txt before playing in the updated release.

The 3.7.4 Update is listed below. 3.7.5 is identical to this post, with the except that the load bug for class sync is fixed.

The latest version of D20PRO adds fixes for numerous bugs. Several game templates have been updated. Download it now!

D20PRO version 3.7.4 is here, introducing a ton of exciting fixes and gameplay enhancements. You can download it now from the Get D20PRO page. Read on for feature highlights and a peek at what is coming next.

Check out the release notes for a full list of the features and enhancements packed into D20PRO version 3.7.5. Below are some of the most significant highlights: 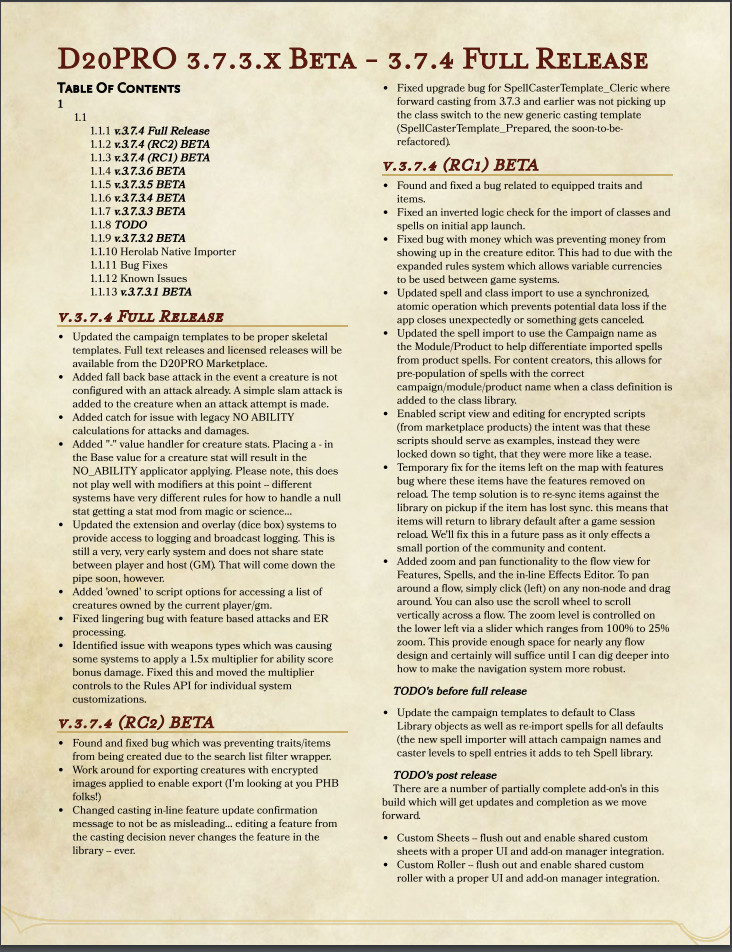 A view of the Extensions panel. It’s a bare UI, but will get some TLC in the next release along with some of the other UI elements. Extensions allow for creating a single container in-app tabbed browser which has full access to the Javascript bridge provided to Add-ons. This is a great place to build your own web app or test a new one. Unlike Add-ons, which are integrated into the creature menus, Extensions need a UIN to operate from a creature context, like with a character sheet. Right now, entering this data is a manual process but will be updated along with rest of the user experience. Extensions can also be used for non-bridge web apps like the built-in Discord app access. 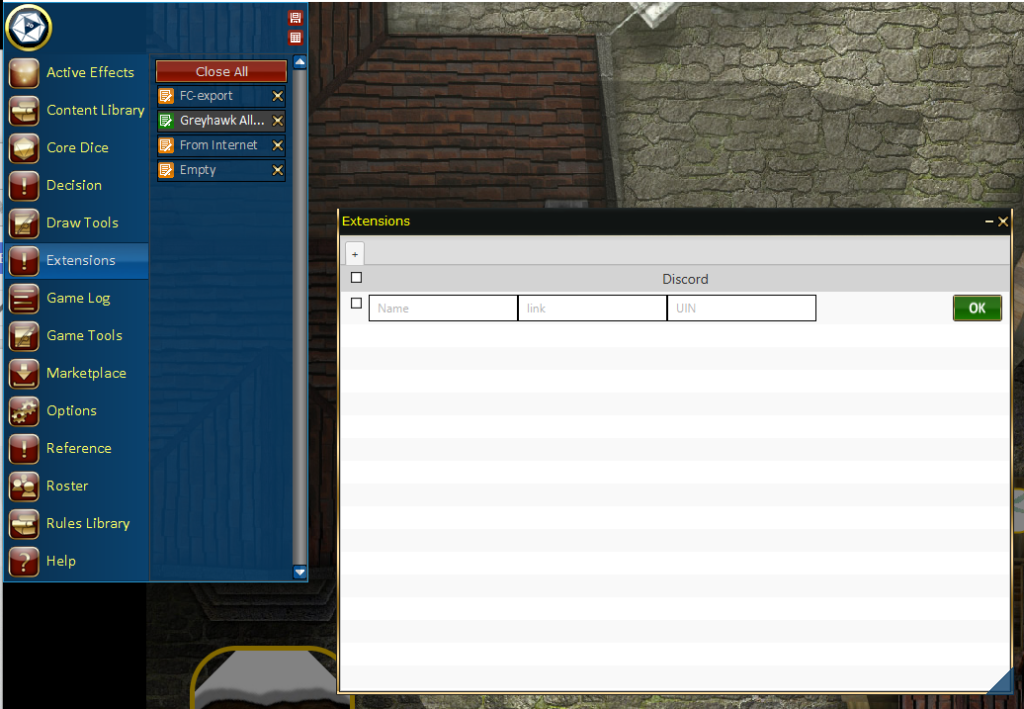 Example javascript utilizing the javascript bridge built into D20PRO’s Extensions and Add-On systems. This snippet is from an adaptation of the HTML5 deck-of-cards from https://deck-of-cards.js.org/. Combined with some other code elsewhere, this reports the card drawn to the gamelog.

You can see a Deck of Cards video and an Example of the Tranposrt effect here.

Old and New character sheet systems in D20PRO v.3.7.4. Showing the Custom Character sheet add-on with data populated from the D20PRO creature model. Custom Sheets can be any html source which can then utilize a javascript bridge to access and populate the elements. URL’s for add-ons can be overridden in the options->rules panel. 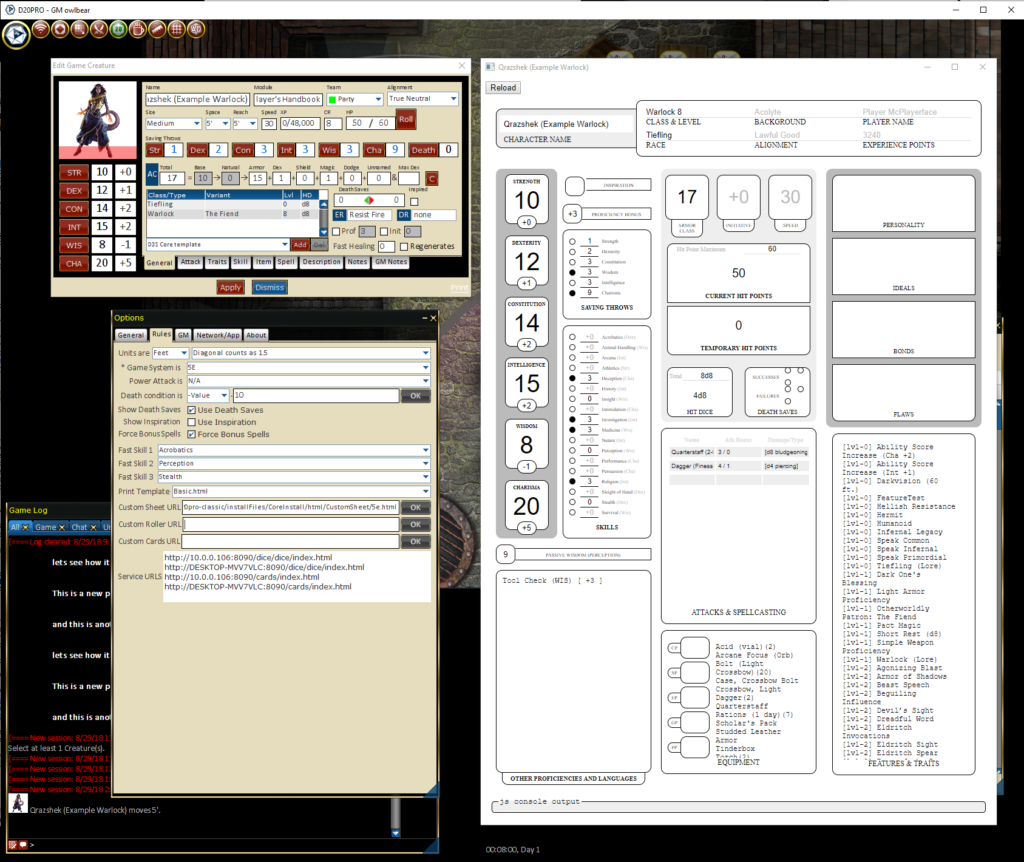 Example of using D20PRO’s feature implementation with wall of fire from the D&D Core: Player’s Handbook. The spell allows the player to place up-to 12 squares of area which are then marked as the wall of fire. When creatures pass through the wall, additional damage prompts are presented to the GM to resolve. The view is a GM window so all creatures are visible and movable despite visibility by the player.

Map Segmentation is another new feature in D20PRO. This feature provides the ability to change how Templates (spell shapes) can be placed on the map. The higher the segmentation value (1 – 5 currently) the more snap-to points in a given grid unit will be available to place a template. We advise using a segmentation value of 2 as this provides center and edge mid-points along with corner placement.

You can view the video here. 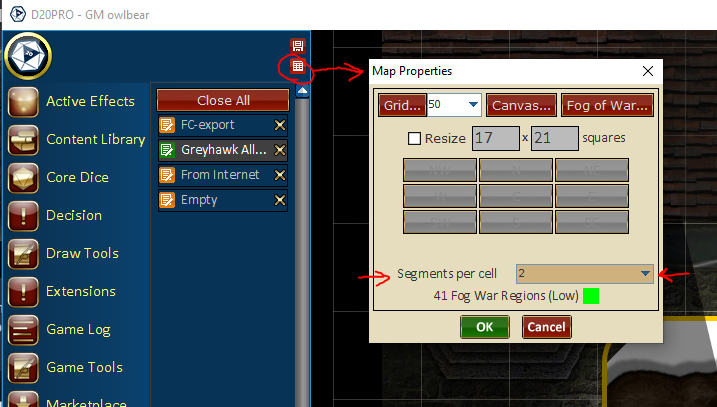 Here we see Map Segmentation (value of 2) at work. The Fireball (red) is placed on the center of a grid unit directly in front of the caster, while the Orange template (just a random template) is placed using the old corner-only location. 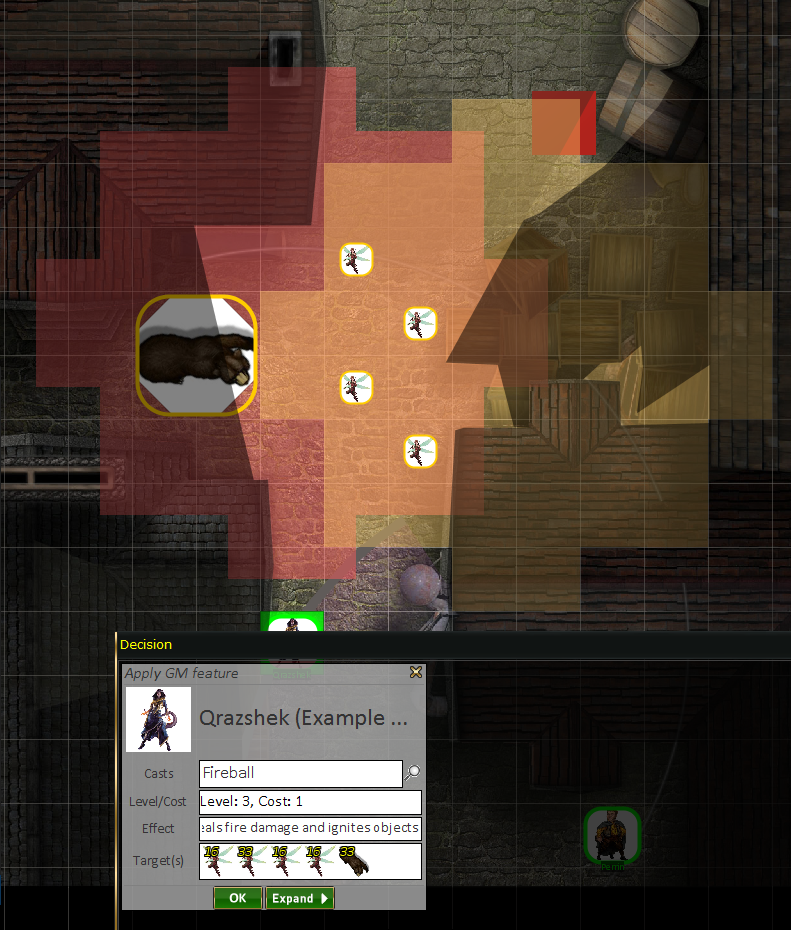 We’ve also been working on upgrading the Map Marker experience. Currently the only place the new HTML view is accessible for Map Markers is from within the marker console. However, this will propagate out to the other aspects of the application such as Game Log and mouse over, as we move forward! 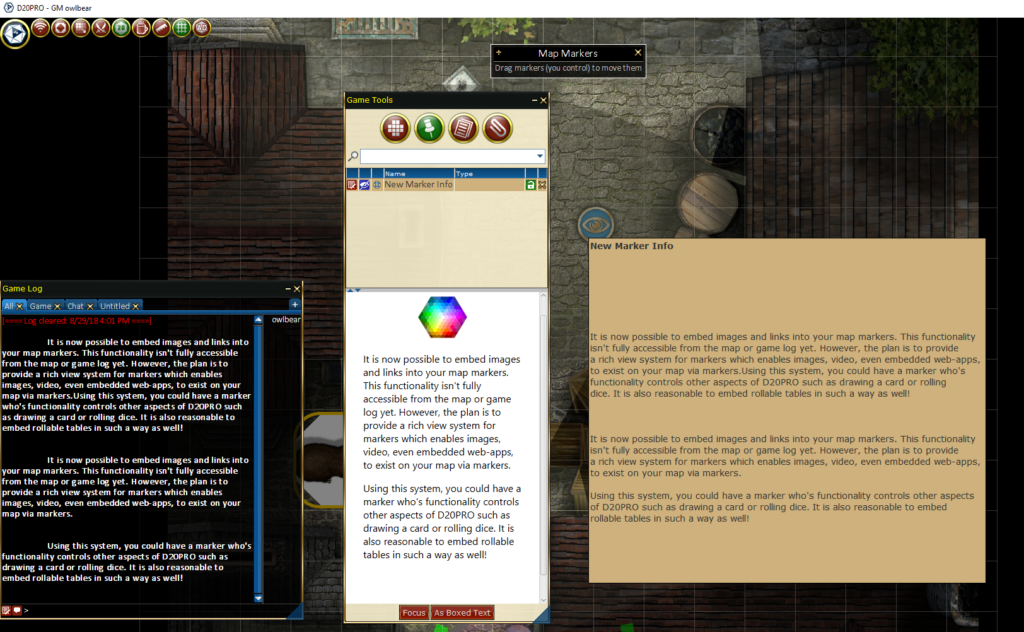 Zoom to Scale allows D20PRO to be used with physical mini’s on a horizontal display. Due to public request, we’ve added a Zoom-To system to D20PRO which lets you zoom the map to a physical 1″ resolution by either clicking the Zoom Map option or by pressing ‘F8’. Zoom-To does not lock the zoom but it does immediately zoom in on the current map location and can be pushed to connected players as their view scale! 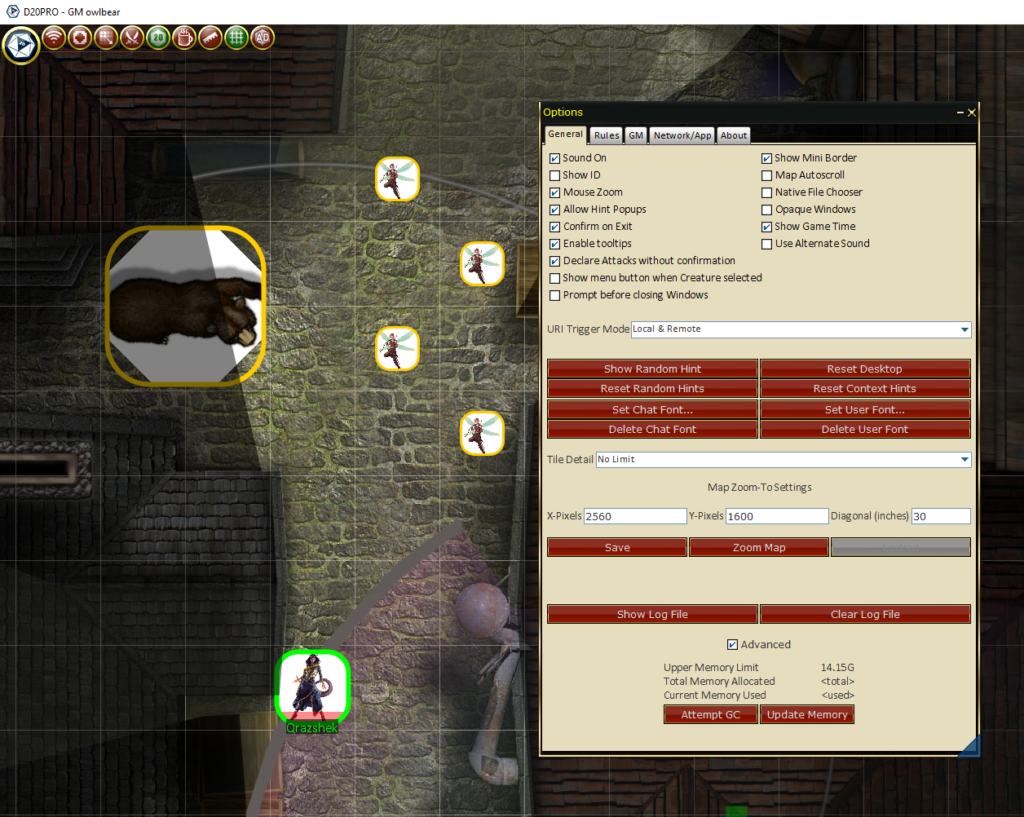 One thing that was unintentional in the way that scripts and encrypted content were built originally was that scripts were locked out for purchased content. This has been disabled so folks who purchase the D&D Core: Player’s Handbook or other script enabled products can learn from or modify the scripts as they see fit. In addition, all of the campaign templates that ship with D20PRO v.3.7.4 has been updated to have a full script library of example scripts for everything from teleporting to adding custom rolls to the game log. 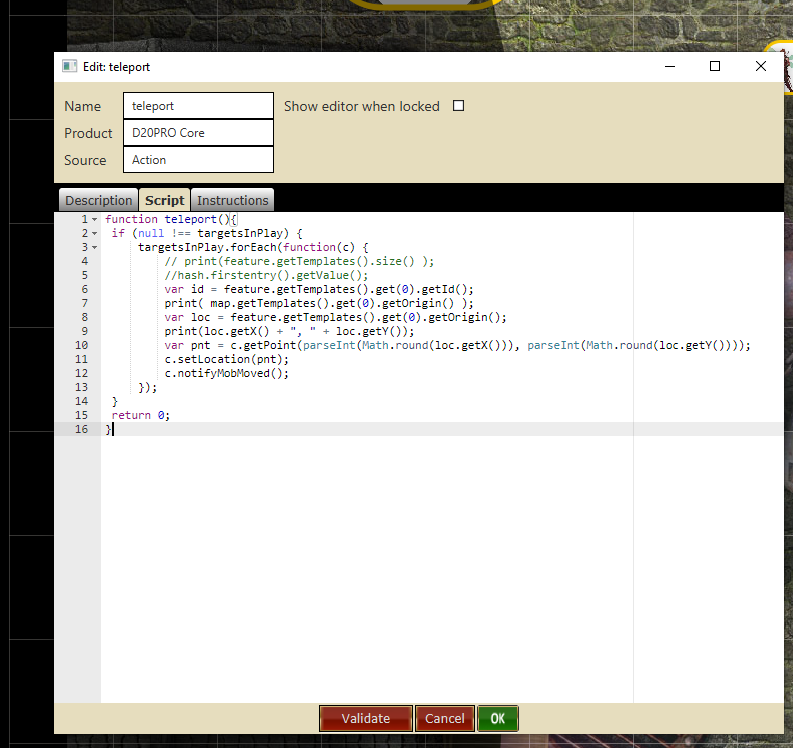 In D20PRO v.3.7.4 we’ve updated the Fog of War region colors so they are more distinct when editing visibility and/or the area’s themselves! 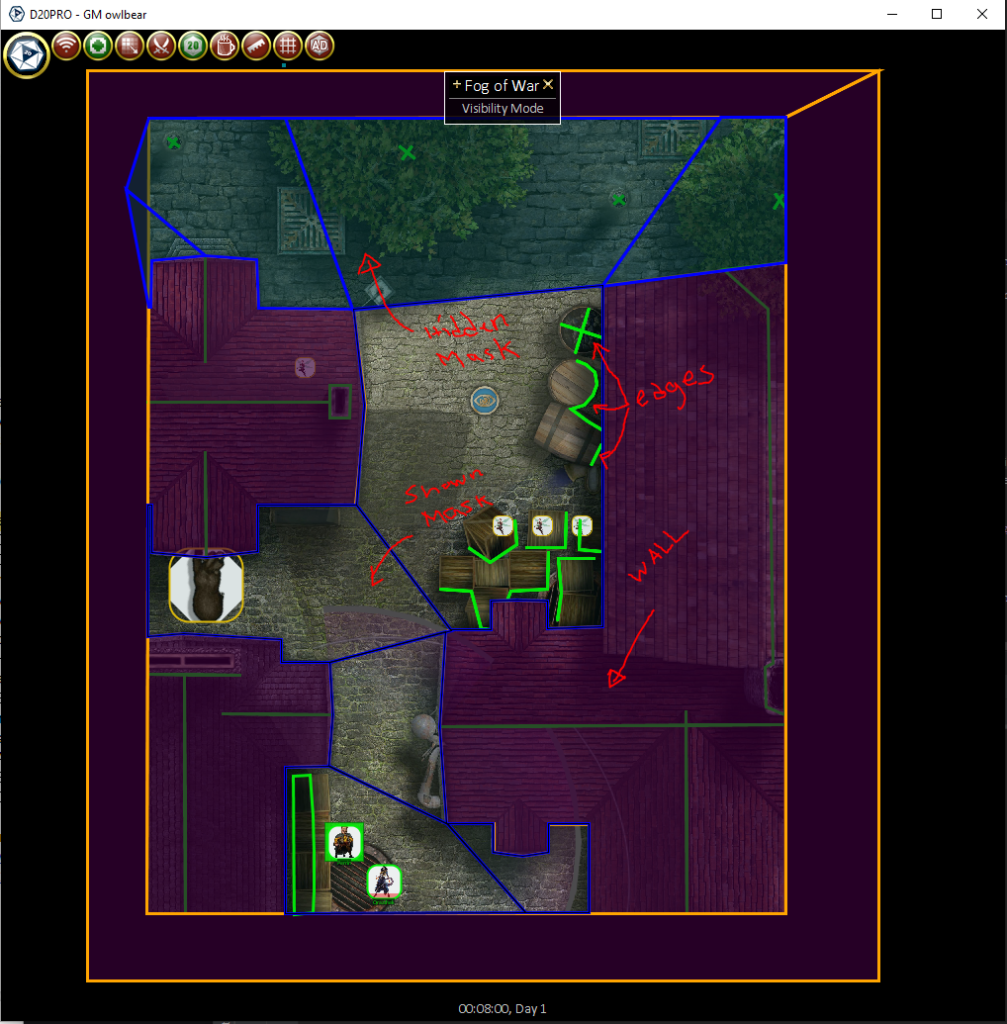 D20PRO fog of war “in-play” view. partially revealed. In addition to the mask colors when editing, in D20PRO v.3.7.4 we updated the in-play look and feel of hidden masks as well as areas of a shown mask who is not revealed by a light source. In both cases, the GM sees a nice dark grey area with the ability to see and interact with the objects below. A PC would see a black area, or, in the event the GM has set the Fog of War Mask Opacity to something other than the default, they players would see the map art, but creature will remain hidden. 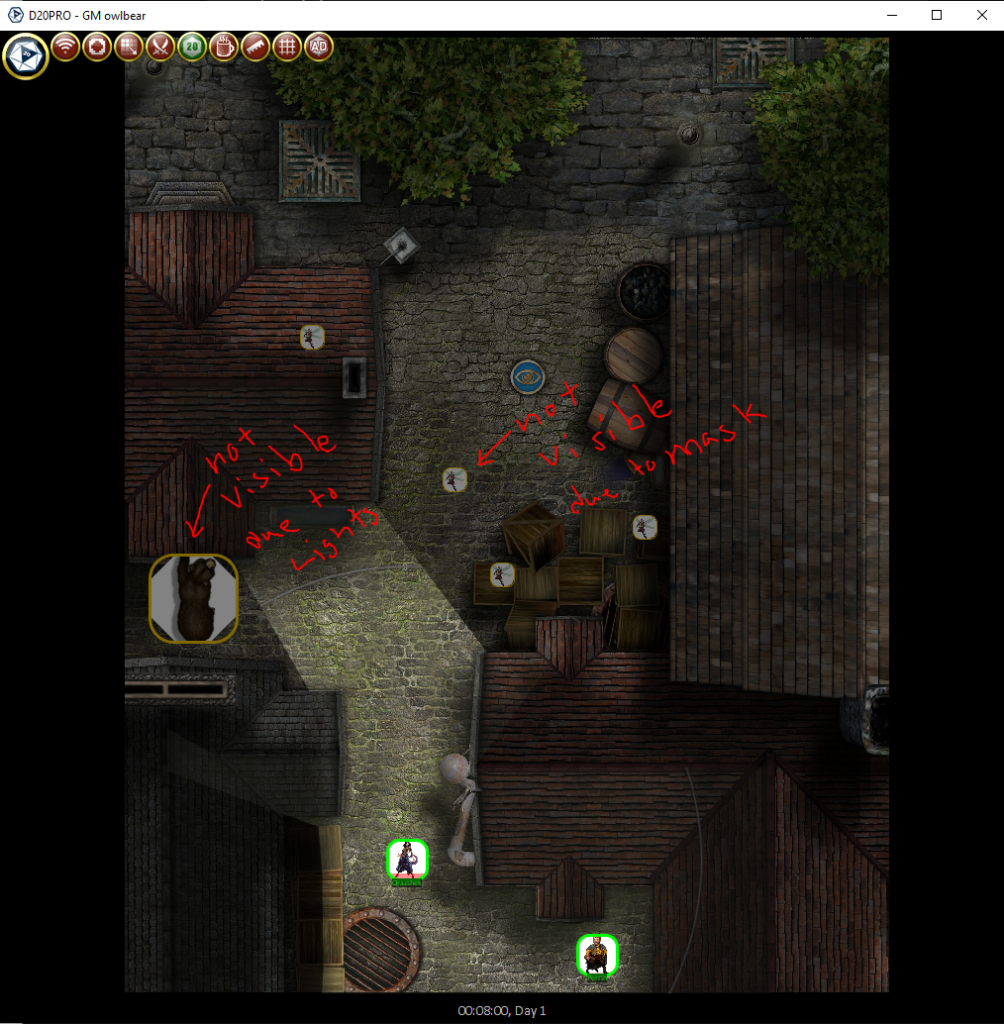 D20PRO v.3.7.4 has an improved lighting engine now. Faster than in 3.7.3 and still being improved, the new lighting allows for gradient lights as well as image-based light sources. Lights are defined as an object which consumes fog of war zones and reveals hidden object/tokens/etc. below said zones. With the ability to tether a light to a token, Lights can also be used to represent auras, ranges, summoning circles and much, much more. 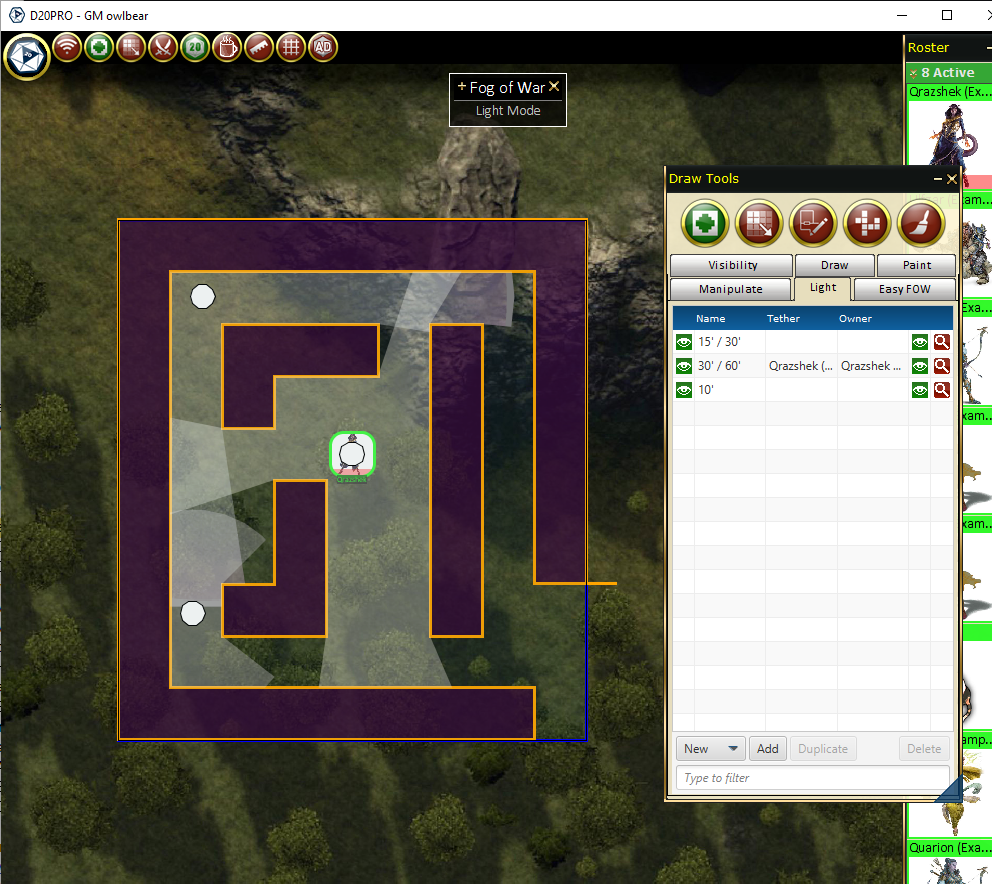 What does all the above mean for you? First, it represents a significant enhancement to the gameplay experience within D20PRO. Second, it sets the stage for the further feature and content enhancements.

As you can see, there is quite a bit of RPG gaming goodness packed into D20PRO 3.7.4, but there are even more new features and content on the way. It is going to be a very exciting fall for D20PRO. Stay tuned!