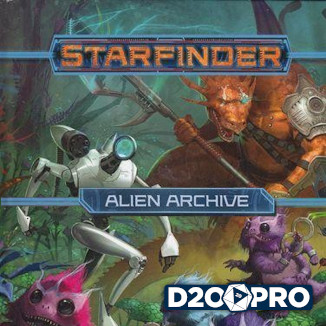 Hunt Crest-eaters in the canyons of Kasath, avoid Asterays in deep space, make deals with Drow Arms Dealers, and more with the Starfinder Alien Archive 1.

This book brings to D20PRO numerous creatures and aliens to encounter in your Starfinder adventures. It also includes new equipment, ships, and the summon creature spell.

Each race, creature, item, spell and more has been adapted to work inside D20PRO. This product provides a Rules Library including the following:

There is a Starfinder: Core rulebook update to v0.3 (1/27/20). The updated Core system dataset is required to use this product.

When installing a Core System ruleset it is strongly suggested to do so as a newly created empty campaign.

You can see all Starfinder compatible products on the Marketplace.

You can buy and download products directly from the D20PRO software. Click on the Marketplace link in the main D20PRO menu, then click Launch Marketplace [step-by-step instructions].