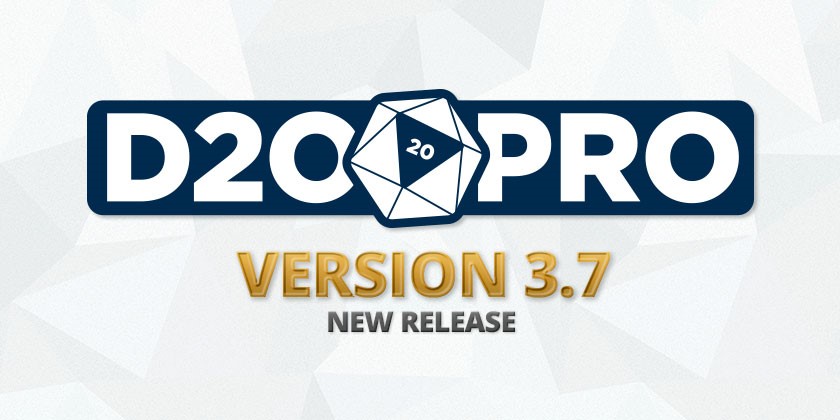 D20PRO version 3.7 is here and it introduces a TON of exciting new features and gameplay enhancements. You can download it now from the Get D20PRO page. Read on for feature highlights and a peek at what is coming next.

Check out the release notes for a full list of the features and enhancements packed into D20PRO version 3.7.  Below are some of the most significant highlights:

The biggest enhancement introduced with version 3.7 is the Rules Engine. In fact, the Rules Engine is what powers many of the features listed above – and it will enable several more going forward.

Rules API – This is a programming interface to define a rule system and the associated rules logic (modifiers, attacks, effects, etc.). The Rules API will make it possible for us to offer new game systems for use within D20PRO. It will also enable members of our community who know a little JavaScript to create their own rule systems.

We’ve released the basic Rules API framework with 3.7. Future releases will further expand and refine this foundation (for example, allowing a new ruleset to have its own character sheet and UI elements).

As you can imagine, the Rules API sets the stage for some very exciting things for D20PRO!

Rules Library – This is a new menu area within D20PRO where you will be able to edit and create rules and gameplay behaviors for a specific game system (as defined by the Rules API).

Putting it all together, here is how you would use each tool: Features and Spells are where you create an action and its effects. Templates allows you to bundle Features and Spells while defining usage costs. You assign those templates to Traits or Items so that players and creatures can use them in your campaign.

We’ll have some tutorials to help clarify how this all works in the near future.

Rules Editor UI – The gameplay logic of Features and Spells is editable from within D20PRO using a new Flow view, which is basically a visual scripting editor. Each aspect of a Feature or Spell is defined by adding “nodes” to define the appropriate behavior. This includes things like effect, save, status, area of effect, duration, and flavor text. You can edit the description, short description and GM notes via a rich-text editor.

What does all the above mean for you? First, it represents a significant enhancement to the gameplay experience within D20PRO. Second, it sets the stage for further feature and content enhancements.

As you can see, there is quite a bit of RPG gaming goodness packed into D20PRO 3.7, but there are even more new features and content on the way. It is going to be a very exciting summer for D20PRO. Stay tuned!